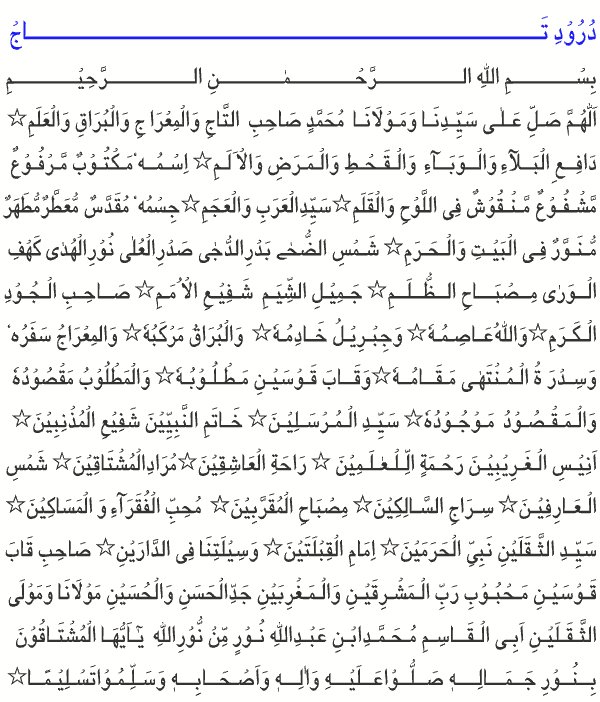 The following is the transliteration and translation of a famous invocation of blessings on the Prophet entitled Darud taj or “Invocation of the Crown” which is especially well known in the Indian subcontinent.

O Allah, send blessings and Peace upon our Master and Patron Muhammad,

The Owner of the Crown and the Ascent and the Buraq and the Standard,

The Repeller of Affliction and Disease and Drought and Illness and Pain.

His name is written on high, served and engraved in the Tablet and the Pen,

The Leader of All, Arabs and non-Arabs,

Whose body is sanctified, fragrant, and pure,

Illumined in the House and the Haram,

The Sun of Brightness, the Full Moon in Darkness,

The Foremost One in the Highest Fields, the Light of Guidance,

The Cave of Refuge for Mortals, the Lamp That Dispels the Night,

The Best-Natured One, The Intercessor of Nations,

The Owner of Munificence and Generosity.

Allah is his Protector, Gabriel is his servant.

The Buraq is his mount, the Ascent is his voyage,

The Lote-Tree of the Furthermost Boundary is his station,

Two Bow-Lengths or Nearer is his desire,

His desire is his goal, and he has found his goal,

The Master of the Messengers, the Seal of the Prophets,

The intercessor of sinners, the friend of the strangers,

The Mercy for the Worlds,

The sun of knowers, the lamp of travellers,

The light of Those Brought Near,

The friend of the poor and destitute,

The master of Humans and Jinn,

The Prophet of the Two Sanctuaries,

The Imam of the Two Qiblas,

Our Means in the Two Abodes,

The Owner of Qaba Qawsayn,

The Beloved of the Lord of the Two Easts and the Two Wests,

The grandfather of al-Hasan and al-Husayn,

Our patron and the patron of Humans and Jinn:

A light from the light of Allah.

O you who yearn for the light of his beauty,

Upon him and upon his Family.