“One is to beseech the Most High that he completes something on account of the holiness of such a such person. This is permissible by consensus regardless of whether this is [done] at the grave or some other place. No one has any objection to this.

“The second is to address the person of the grave by saying, ‘You fulfil my work’. This is shirk, regardless of whether this is said at the grave or away from it. And that which has been mentioned in some narrations, ‘Aid me, oh slaves of Allah.’ In reality this is not isti’anah at the grave but the seeking of aid from the slaves of Allah who are in the desert; in that Allah has appointed them there for some work. So this is not from this (the concept of isti’anah). To bring [this] as proof of permissibility is ignorance of the meaning of the hadith.

“The third is to go close to a grave and say, ‘Oh such a such person, pray for me that the Most High fulfils my work.’ There is a difference among the ‘ulama regarding this. Those who consider it permissible to believe that the dead can hear consider this permissible and those who do not believe that the dead can hear forbid this … However, there is no difference in the hearing of the Prophets (peace be upon them), on account of this they are exempt.”1

Please note , no where in the whole of Fatawa Rashidiya has Shaykh Rashid Gangohi quoted Mi’ah Masail and Arba’in Masail on the issue of Istighatha/ Istianat.

This is what Shaykh Gangohee writes : [ And which our deobandi friend has translated but leaving/mis translating the first two lines which I am mentioning in BLUE ]

“It has already been said that you should look into Mi’ah Masail and Arbai’n Masail of Mawlana Ishaq Dehalwi on this matter. Since the question is now addressed to me , it was necessary for me to give a short reply……”

The above quote is followed is by the answer which my Deobandi MUFTI has quoted . ! 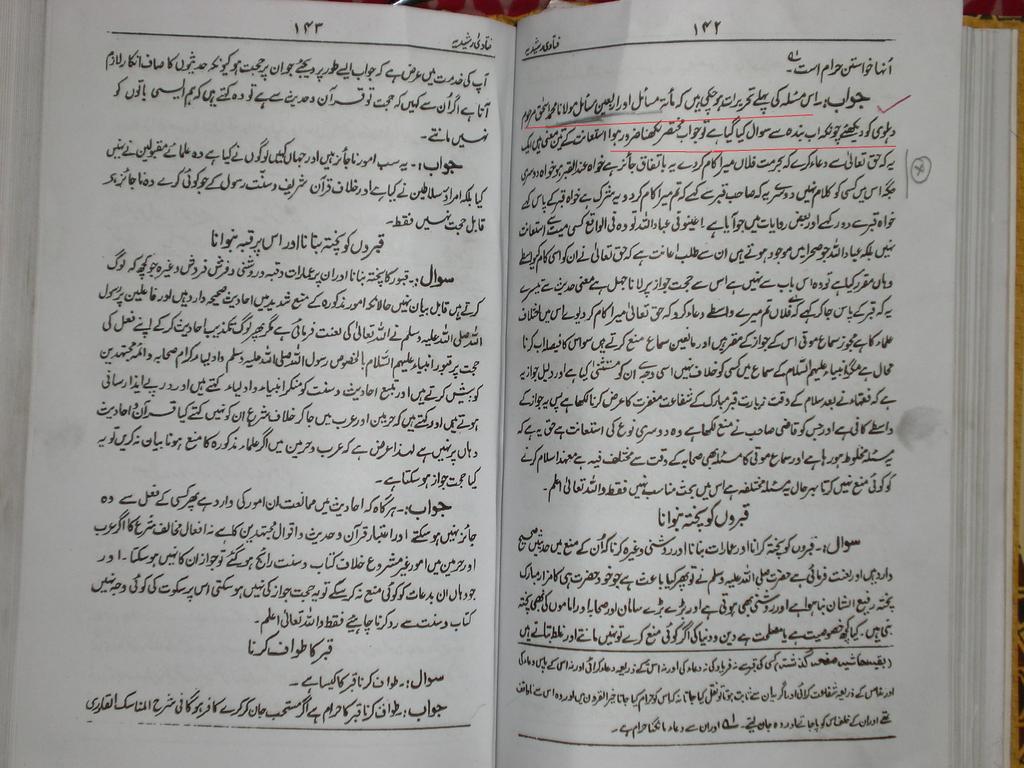 Can Deobandis reply how and why have they said that this is the answer given by Shah Ishaq Dehalwi ? Where as, this answer is by the Imam Rabbani of Deobandis Shaykh Rashid Gangohi! 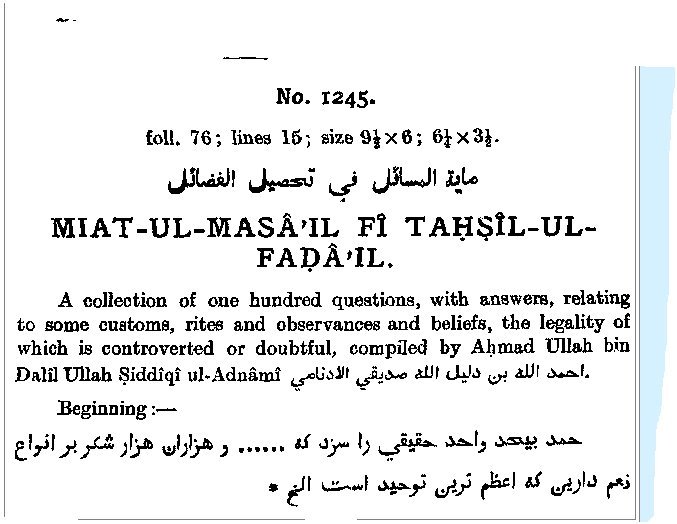 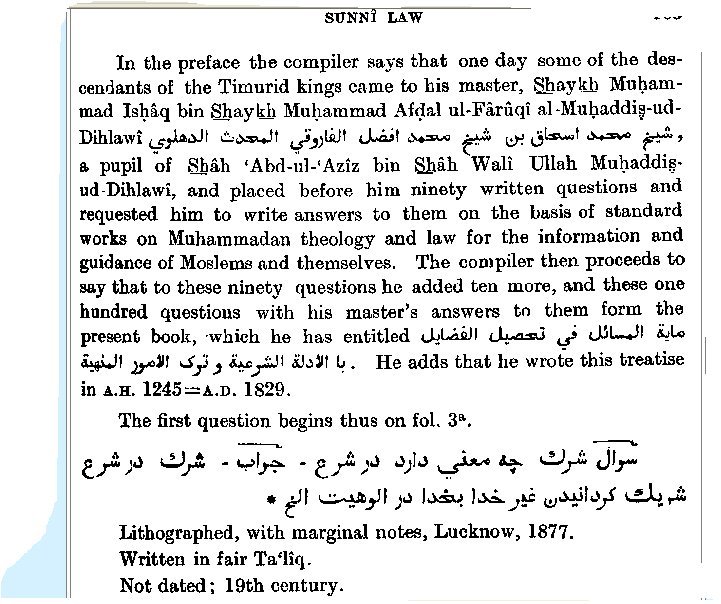 Please note the manuscript detail as seen in the scan

1 Compiled by Ahmed Ullah bin Dalil Ullah Siddiqui Ul Adnami “.
2 To the Ninety questions originally asked , ten more questions were added by the compiler .
3.Compiler says that he wrote this treatise in 1245 AH ( 1829)

Based on these information my deobandi friend says

For us it is enough that Imam Gangohi [r.h], grand-student of Shaykh Shah Muhammad Ishaq [r.h], has accepted this book. Further, it was shown from records of Khuda Bakhsh Library that this book indeed is correctly attributed to Shah Ishaq and no known controversy in their knowledge.”.

Had my friend bothered to investigate into the details of this manuscript or tried to meet those scholars who deal with study of manuscript , he would have have learnt more things.

The other easy way was to take a printed copy of the above work and read its detail.

But when internet is the sole source of information , we don’t bother to meet real scholars.

3 What were those ten questions which were added by Ahmed Ullah bin Dalil Ullah Siddiqui Ul Adnami.?

If my friend would have taken a printed copy of this work he would have found out.

“Out of these ten questions , six questions are the same old questions which were asked to the scholars of Delhi during the time of Shaykh Nizamuddin Awliya rd[Died 725AH] .Since no new answer is required , the answer to these question is taken from the book by Asmatullah bin aazam saharanpuri”.

6. Allama Fazle Rasul Badayuni [rd] wrote a refutation to this book with the name Tau see al masail in 1266 AH.[1850]. This was published by his relative Mawlana Faiz Ahmed badayuni (rh).

It also makes it clear that the first printed edition of Miat ul Masail was already in market before 1266. The first edition was published around 1262 AH , and Mawlana Ishaq (rh) was already dead by this time.

In preface to this book, Basheer ad deen Qannawji himself writes

“ Miat ul masail is not authored by Shah Ishaq , instead it is only ascribed towards him”

Since Allama Fazle Rasul Badayuni pointed out many mistakes in Miat al Masail, all edition of Miat al Masail printed after 1266 AH were changed .

Allama Fazle Rasul Badayuni then wrote Fayuz e arwahe quddusi[persian] and listed all the changes made in the two editions .

“ Masa’il arbaeen and miat al masail , both these books have many mistakes and are ascribed towards Shah[Ishaq] Sahab. Few senior scholars have informed me that there were few bad people among shah sahab’s student. Shah Sahab had husn e zan towards them.When ever any fatwa (question) used to be brought in front of Shah Sahab , he used to ask any of these student present their to answer these questions. These people usually used to incorporate their views in the answer. These answers were then compiled and ascribed towards shah Sahab”

7 The above quote of Mawlana Mohsin Turhati is also supported by Nazeer Hussein Dehalvi , who was a student of Shah Ishaq and the biggest wahabi scholar in India.

“ In order to test my progress and to satisfy those who used to come with questions , Shah [Ishaq] Sahab used to ask me to write answers to those questions”

As far as manuscript details are concerned, please note

Though this post has nothing to do with Istighatha , but it is necessary to know all this so that people are cautious when they read post made by these people.

Since my Deobandi friend has nothing to say , he said

“
Lastly, what is mentioned in these two books is similar to what was mentioned by his predecessors such as Shaykh Ismail shaheed [r.h], Imam Shah Abdul Aziz [r.h], Qadi Sanaullah Pani Pati [r.h], Muhaddith Shah Rafiudeen Dehlawi [r.h] and Imam Shah Waliullah Dehlawi [r.h] on these hot topics”

Ismail dehalwi can be a hujja for them. The scans [with translation] from works of Shah Waliullah Muhaddith (rh) , Shaykh Abdul Aziz (rh) and other scholars have already been posted on this website.

When the Deobandi Mufti and party were caught lying they had no option but to speak more lies!

Since the deobandis were proved to be a fabricators , another deobandi wrote

“Our Beralwi brethren, as usual, have half quoted Hajji Imdadullah Muhajir Makki’s [r.h] Faisla Haft Masla. They left out the relevant portions from the same page which clearly shows Hajji sahib’s opinion on impermissibility of calling dead from far with the belief that they can always hear us.”

How much truth is present in this accusation should be checked by every reader by   clicking  the above link!

You will find complete scan.The deobandis had to resort to lying in order to save  their belief!