“Mawlānā Muhammad Isma’il Shaheed was a classmate of Mawlānā Munawwaruddin. After the passing of Shah Abdul Aziz, when he wrote Taqwiyatul Iman and Jilaul‘Ainayn and his creed spread throughout the land, all the scholars rose up against it. Theperson who refuted these books the most was Mawlānā Munawwaruddin who wroteseveral books and in 1240 AH, the famous dialogue happened at the Jamia Mosque ofDelhi. All the scholars of India were asked to effect a ruling [fatwa] and thereafter a fatwa was also beseeched from the Haramayn.

From his writings it is evident that initially Mawlānā Munawwaruddin tried to convince Mawlānā Isma’il and his son-in-law Mawlānā Abdul Hay and their friends and tried all means to persuade them. However, when all his attempts came to nothing, he was forced to debate and refute. The famous debate at the Jamia Mosque of Delhi was organised where on one side were Mawlānā Isma’il and Mawlānā Abdul Hay and on the other side were Mawlānā Munawwaruddin and all the scholars of Delhi.

They took part in this noble Jihad to protect the creed of the Ahlu’s Sunnah wal Jama’ah through their
knowledge and actions.

Hazrat Shah Makhsoos Ullah bin Shah Rafiuddin bin Shah Waliullah Muhaddith Dihlawi was asked seven questions by ‘Allama Fazle Rasool Uthmani Badayuni regarding Taqwiyatul Iman. These questions and answers have been published by the name of Tahqeeq al-Haqeeqah from Bombay in 1267 AH. Three of these answers are presented here.

“The answer to the first question concerning Taqwiyatul Iman – and I call it Tafwiyatul Iman (with the letter faa) – is that which I have written in a monograph refuting it named Mu’eedul Imanf. Isma’il’s book is not only against the traditions of our family but it is against the Tawĥīd of all the Prophets and Messengers themselves! Because Prophets and Messengers are sent to teach the people and make them walk the path of Tawĥīd. In this book however, there is no sign of that Tawĥīd nor the Sunnah of the Messengers. Things
that are claimed as Shirk and Bid’ah in this book and taught to the people have not been
labeled as such by any of the Prophets or their followers. If there is any proof otherwise,ask his followers to show it to us.

The answer to the fourth question is that the Wahabi’s book [ibn Abdu’l Wahab Najdi] was the text and this is as if it’s commentary. The answer to the fifth point is that Shah Abdul Aziz was impaired by his poor-sight. When he heard about the book, he said that if he were not ill, he would have written a refutation similar to Tuhfa Ithna Ashariya.

It is the grace of Allah that I (Mawlānā Makhsoos Ullah) wrote a rebuttal of the commentary (Tafwiyatul Iman) by course of which the text (Kitab al-Tawĥīd) was also refuted. My father, Shah Rafiuddin, had not seen the book but when Shah Abdul Aziz saw it and expressed his disapproval, I set out writing the refutation.

Here is the scan 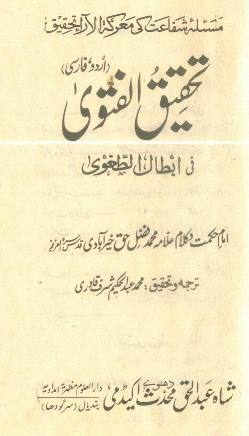