‘O believers! If any disobedient comes to you with any news make a strict inquiry lest you may hurt any people improperly then remain repenting on what you have done. ( 49: 6)

It has been an old trick of enemies of Islam to spread rumor and cause confusion among the muslims. Shia and Deobandi , both these deviant sect present false history to the muslim population. Shaykh Rashid Gangohi, who is called ‘Imam e Rabbani” by the Deobandis, said

“ Guru Nanak was the “Khalifah ”[student] of Fariduddeen ganj shakar[ rh] . Since he used to be in the state of ecstasy, muslims did not pay attention to him “
[ Tazkiratur Rashid ]

Imam e Rabbani of the deobandis also said
‘ Guru Nanak was a muslim .‘ 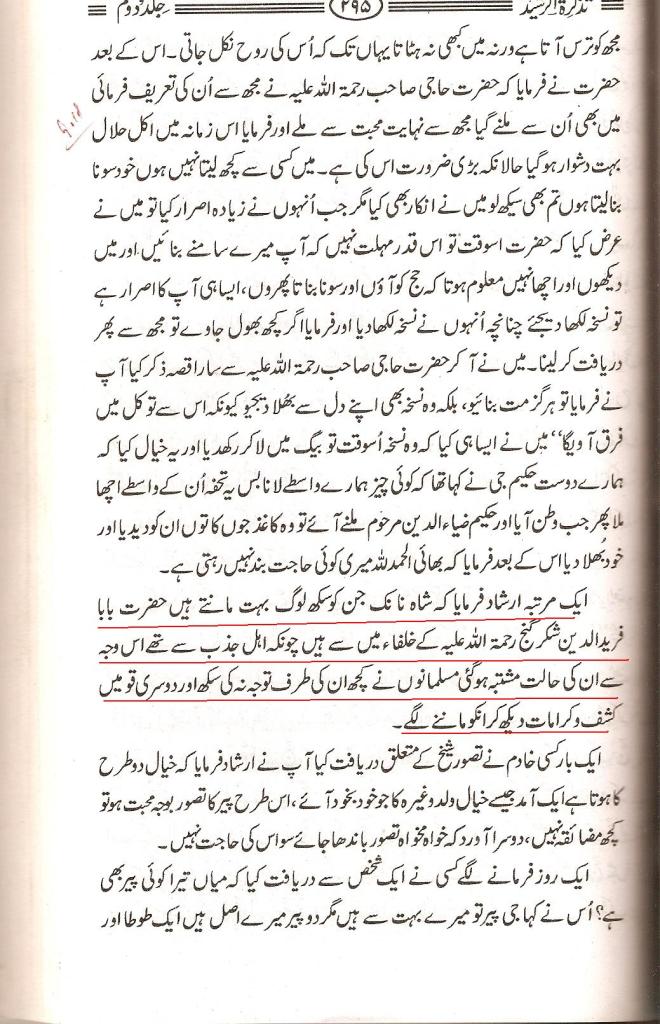 This is such a big lie that any lay person can check and see the truth. Baba Fariduddeen Ganj Sahakr [ Radi Allahu taa’la] was born in 1175 CE and died in 1263 CE. Guru Nank , the founder of Sikh religion was born in 1469 CE and died in 1539 CE. There can not be any meeting between these two person ! But the deobandis are so full with love for their “imam e rabbani’ that , they accept this lie to be a fact and still publish that lie in their book !

This is the state of Shaykh Rashid Gangohi , who is one of the top leader of Deobandi sect! This statement not only shows how poor was Shaykh Rashid Ahmed in history , but also , how he used to quote things without any reference! This characteristic of making statements without providing any evidence is a special mark of this deobandi sect!

This deobandi made more than fifteen post attacking great scholar of Islam , Fazle Rasul Badayuni [rh] and in none of his post he provided any detail about this scholar. This is sufficient to know that this deobandi is not aware of history , like Mawlana Rashid gangohi !

“He was a faqih who was argumentative and very biased in his beliefs, in constant opposition of the ulama, most far away from the sunnah and an aid to biddah, encountered the people of haqq with his lies and innovations and a lover of the World.

Our deobandi friend should know that that Hakim Abdul Hay lucknawi was born in 1286 AH and died in 1341 AH. It means he was only three years old when Mawlana Fazle Rasul Badayuni died . So what is the source of this information which he is quoting? From whom did he “hear’ this? In which book did he read this? It seems deobandis are not aware of the basic rule of history. If some one makes a remark about an historical incidence or a person , then it should be supported with a strong evidence, other wise it does not hold any weight. Even if a contemporary scholar makes a remark about another person , he should provide evidence to support his remark and when some one who is not even a contemporary scholar makes a comment , he needs to bring strong evidence to support his claim.

Hakim Abdul Hayy was a wahabi scholar from India, who was against four school of fiqh and sufi tariqah. He supported Hindu view in the dispute of Babari masjid. In his historical biographical work’ Nuzhat al khawatir wa bahjat al masami wal nawazir “, he has made very wrong and biased comments in Vol 6 and 7 about scholars of Ahlus sunnah . But these comments hold no weight , as he has not provided any reference to support his claim.

“He was a faqih who was argumentative and very biased in his beliefs, in constant opposition of the ulama, most far away from the sunnah and an aid to biddah, encountered the people of haqq with his lies and innovations and a lover of the World.”

It seems Shaykh Abdul Hayy lucknawi did not know which was the first book written on the life of Mawlana Fazle Rasul Badayuni [ Rh]. And our deobandi friend would not even have thought of this question , before writing his article!

To realize why Shaykh Abdul Hayy made those remarks , it is sufficient to see the books which Mawlana Fazle Rasul Badayuni [ Rh] wrote. 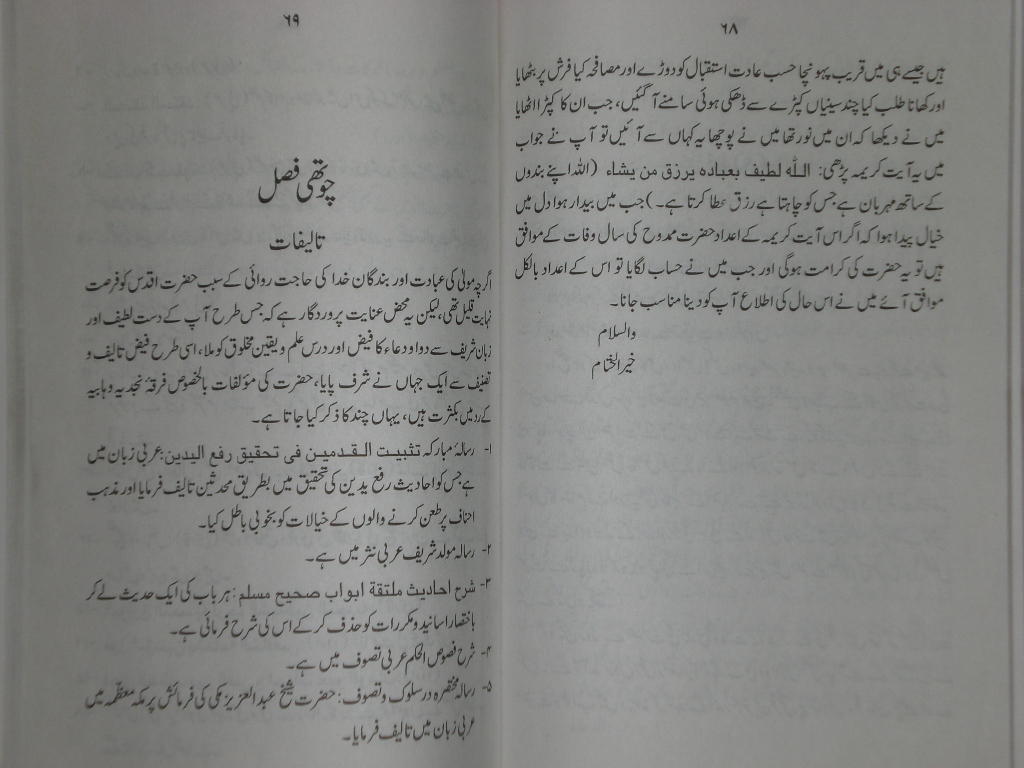 1. Tahqeeq rafadayn—This was written when wahabis attacked Hanafis stating rafadyan is a “must” and hanafis have no evidence for not doing rafadayn.

5 A booklet on Tasawwuf : Written in Makkah al muazzamah on the request of Shaykh Abdul Aziz makki .

If any wahabi looks at this list , he will definitely call the author as ‘ innovator”! That is what Shaykh Abdul Hayy did! What evidence does Shaykh Abdul Hayy or any deobandi can present to prove that Mawlana Fazle rasul badayuni ( rh) was encouraging biddah? Which biddah did he support and in which book? Can any deobandi provide the reference? Mere making remarks without evidence is not accepted by Ahlus sunnah.

Mawlana Badayuni wrote Al Mutaqad Al Muntaqad is a classic book on Aqida of Ahlus sunnah wal jamah which was written in Arabic and he refuted all wahabi belief like ‘seeing Allah in direction ‘ etc.

The net result is : Deobandis have just made a remark without supporting it with evidence. Even shias do the same trick.

In which book did Mawlana Fazle Rasul Badayuni did this? What is the quote? This is just an accusation unless it is proved and I request any deoandi to provide the EXACT QUOTE with Book reference . It is for everyone to see that this deobandi does not even provide the name of the book ! If he is true in his effort , he should provide book name and exact quote.

And he accused and spoke ill of Shaykh Ahmad bin Abdul Ahad al-Sirhindi [Mujaddid Alf-e-Sani [r.h]] who was the Imam of the Mujaddidiya and he [Fazl Rasool] would say, “all of them are deviated and are leading others astray”

This is deobandi style statement which has no reference. Readers can see this lie! Mawlana Fazle Rasul Badayuni [rh) was associated with all the traqia ( sufi order). He has ijaza ( permission) to make mureed ( disciple) in all the sufi tariqah, including Naqshabndi!

Kindly see the scan of the letter from Tawaliul Anwaar , which Mawlana Fazle Rasul Badayuni wrote to his son ( Mawlana Abdul Qadeer rh) in which he grants him permission in NAQSHBANDIYA tariiqah !

This deobandi does not have any reference for these claims ! He is just relying on some secondary resource and that is why he never gives the book name and exact quote !

Shaykh Ashraf ali thanvi was born in 1280 AH and died in 1362 AH. It means he was nine nine years old when Mawlana Fazle Rasul Badayuni died .

Shaykh Ashraf Ali thanvi says “And he published lies”… but I ask what was the name of that book?
Ashraf ali thanvi has just concoted this statement from his desire and it is a plain lie. In which history book is this mentioned? Which scholar/ historian mentioned this? Morever Shaykh Ashraf ali thanvi himself was a wahabi as he said “ If I had Rs 10000, I would have distributed it and people would have automatically become wahabi.

“one can rely on reliable narrators who have mentioned Fazl Rasuls’ attacks against Mujaddid Alf-e-Sani [r.h] and labelling him a biddati”

Another example of “ baba guru nanak”!

“An important point that we have noticed about the publishing of the books of Fazl Rasul Badayuni is that most were published with the help of government officials. It would not be inept to mention here that Molvi Fazl Rasul Badayuni would get paid 17 rupees daily from the state of Hyderabad which was later changed to 11 rupees.”

Prof Ayyub Qadri died around 1980 and how did he come to know this? From which book has he taken this? If our deobandi friend has read this book of Prof Ayyub he should provide the source of this information!

And who was the ruler of Hyderabad that time? Does our deobandi friend knows that Hyderabad was the only state which was never under british rule! Does he know that the ruler (nawab) of Hyderabad was one of the mureed ( disciple) of Mawlana Fazle Rasul Badayuni!

They say even to copy things one must know the basics of topic and our deobandi friend does not even know that!

Look here , scan from Tawaliul An waar which clearly states that these two nawabs from Hyderabad were the disciple ( mureed) of Mawlana Fazle Rasul Badayuni [rh]! 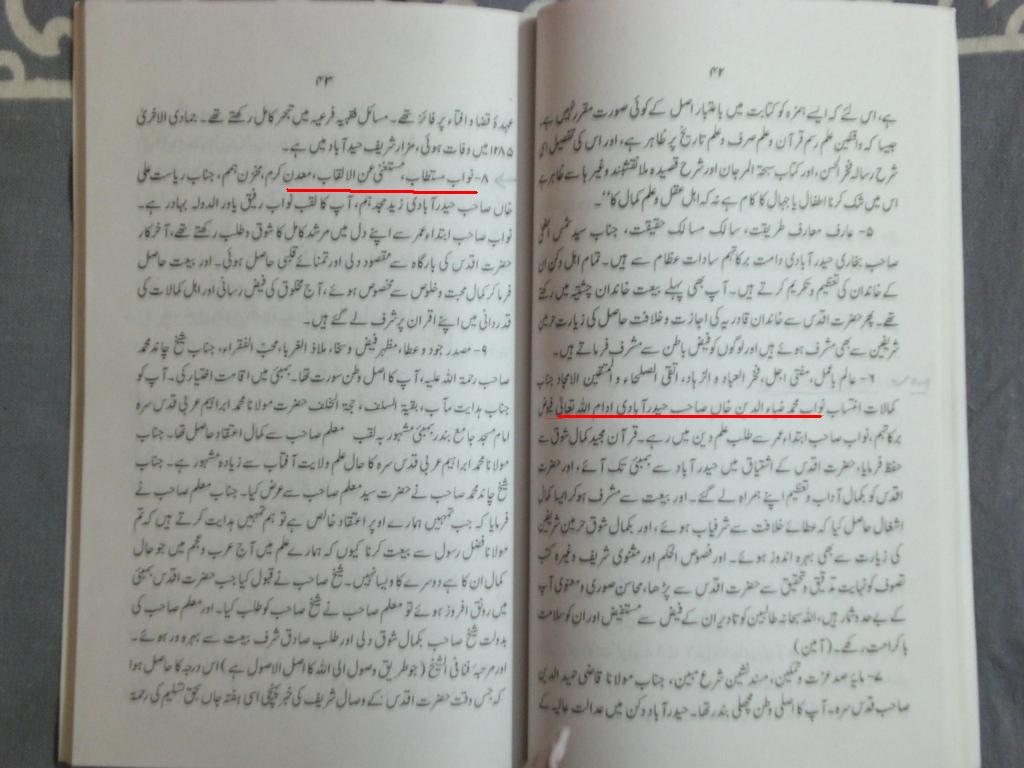 When the british took over the area of Badayun and all financial aid from muslim rulers to the scholars of Islam was stopped by the british , then the rich mureed ( disciple) of Mawlana Fazle Rasul badayuni (rh) started sending gifts and aid to their teacher!

Our deobandi friend wanted to show that Mawlana was taking money from british! Even a student of history knows that Hyderabad was never under British rule!

“Mawlana Hyder Ali Tonki [r.h] has written an important point in this regard that Molvi Fazl Rasul Badayuni started to write books against Wahhabis 20 years after the shahadat of Mawlana Ismail shaheed Dehlwi [r.h] in 1831

Readers can see book no 18 above and realize that Shaykh Hyder ali tonki was a wahabi who was refuted by Mawlana Fazle Rasul Badayuni . Shaykh Hyder tonki was against mawlid , Istighata and other issues on which wahabis always have problem.
Shaykh Ismail dehalvi died in 1831 CE and when we add 20 years to it ,it becomes 1851 . As per wahabi scholar Shaykh Tonki , Mawlana Fazle Rasul badayuni (rh) started refuting wahabis only after 1851!!

Can we all see that our deobandi friend has admitted himself that Mawlana Fazle Rasul Badayuni was against wahabis and used to write against wahabis!!!

And his claim of 1851 is wrong , because Al Bawariq al Muhammadiya was published in 1849 and this book is against wahabis . Before this was written , books like Tahqeeqe rafadayn and mawlid were already written , which were against wahabis !

This is the state of Deobandis who post articles ! Readers should judge to see the truth!