(And Allah will not mislead a people after He hath guided them, in order that He may make clear to them what to fear (and avoid)- for Allah hath knowledge of all things. 9:115) Bukhari relates from ‘Abdullah ibn ‘Umar (Allah be well pleased with him) “Ibn `Umar considered the Khawarij and the heretics as the worst beings in creation, and he said: They went to verses which were revealed about the disbelievers and applied them to the Believers.[Fath ul Bari, Chapter of Killing the Khawarjites and Mulhideen, Volume 16, Page No. 164] —- In Commentory of Chapter Imam Ibn Hajr al Asqalani (Rahimuhullah) writes in Fath ul Bari under this hadith: Imam Tabri (rah) has mentioned this hadith in Musnad of Ali with the chain of Bakeer bin Abdullah in Tahdhib al Athaar, He asked Nafi’ that what was the opinion of Abdullah Ibn Umar (ra) regarding Haruriya (Khawarij), he replied that he (Ibn Umar) used to consider them worst creations of Allah because they applied ayahs revealed for disbelievers on believers.  (Imam Ibn Hajr al Asqalani) said: This Hadith has “SAHIH” chain. It is also proven from the Sahih Marfu hadith of Imam Muslim which he narrated from Abu Dhar (ra) in charectersitcis of Khawarij, the hadith states: They are a creation of worst kind, and Imam Ahmed has also narrated a similar hadith from Anas bin Malik (ra) with a strong chain. Imam Bazzar (rah) has narrated the hadith from Aisha (ra) who narrates from Prophet (saw) that he said: They will be the worst of my ummah and they will be killed by the best of my ummah, The chain of this hadith is “Hassan”[Fath ul Bari, Sharh Sahih ul Bukhari, Volume No. 16, Page No. 168-9, Published by Dar Taybah, Beirut, Lebanon] 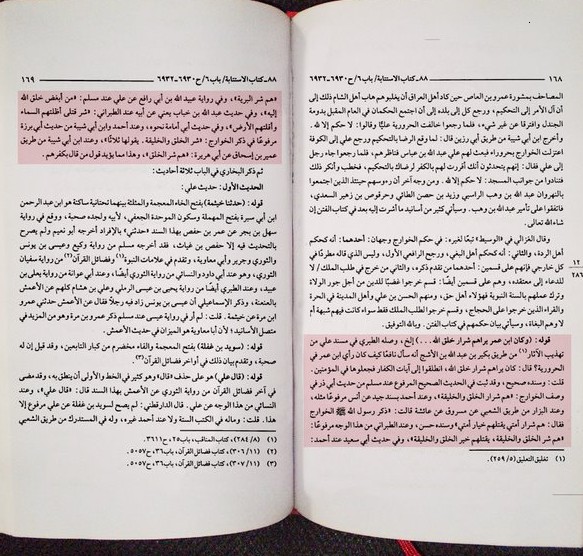