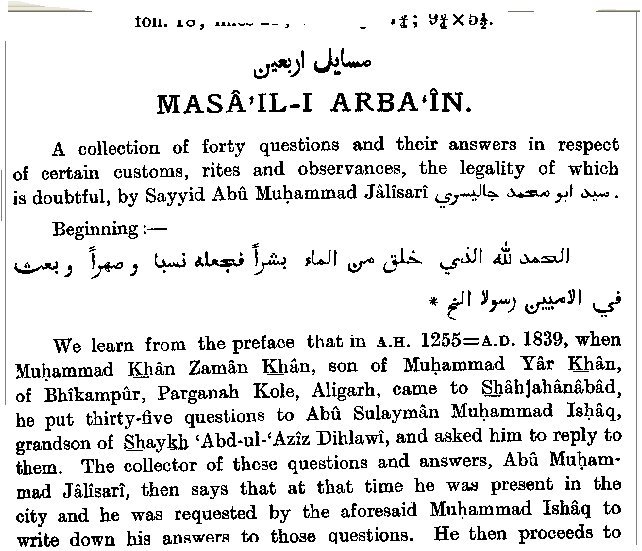 Following points to be noted from Scan

The compiler mohammed Jalisari says [In the preface of the book]

2. The compiler has then added a foreword criticizing the Biddah [Innovation] which was found in marriage and mourning function.

3 The book then consists of forty question and answer

4 In the end the book has a conclusion by the compiler.

5. Kindly note: All these things are done by the Mufti/ author of the fatwa and not the compiler.

6 The first edition of this book was published by Haji Wali Mohammed [ A wahabi] in the year 1261 AH [pages 80,Mohammed printing press , Delhi] and this was two years and three months after Shah Ishaq [Rh] migrated to medina al munawwara.

7. The compiler has not written words like “ My Ustaz or My shaykh” while mentioning Shah Ishaq in preface. Except nawab Sherwani , no one else has counted the compiler [ mohammed Jalisari] among the students of Shah Ishaq.

1. There is no mention of other book { Miat ul Masail) which was compiled in 1245 AH , that is ten years before the present book . Both the books deal with the same topic.

Usually authors give reference to their previous work when they write books dealing with the same topic.

There is no mention of Miat Ul msail either in the preface of the present book or any where in the answer.

And how can it be , when both the books were compiled by two different person and then published on the name of Shah Ishaq.

2. Out of the many refutations written [ Which I am not mentioning to keep my post short], it should be noticed that Shah Ahmed sayeed mujaddidi Dehalwi[Rh] wrote the first refutation Tahqeeq al Haqq al mubeen fe aj bayt masail arbaeen .

Shah Ahmed Saeed has not mentioned or attacked Shah Ishaq any where , but have addressed the compiler with the word” mujeeb”

“ Masa’il arbaeen and miat al masail , both these books have many mistakes and are ascribed towards Shah[Ishaq] Sahab. Few senior scholars have informed me that there were few bad people among shah sahab’s student. Shah Sahab had husn e zan towards them.When ever any fatwa (question) used to be brought in front of Shah Sahab , he used to ask any of these student present their to answer these questions. These people usually used to incorporate their views in the answer. These answers were then compiled and ascribed towards shah Sahab”

2 The above quote of Mawlana Mohsin Turhati is also supported by Nazeer Hussein Dehalvi , who was a student of Shah Ishaq and the biggest wahabi scholar in India.

“ In order to test my progress and to satisfy those who used to come with questions , Shah [Ishaq] Sahab used to ask me to write answers to those questions”

3. Mawlana Nizamuddin Shahjahanpuri ( who is also the translator of the masail arabeen) writes in his book Tuhfa al Momineen ( page 75 and page 111)

“ The compiler of the book ( Abu Mohammed Jalisari) was a man who used to follow hadith and was strict in opposing Biddah. Though people used to call him wahabi , he himself used to say that he was a hanafi”.

4 . Please note originally only thirty five questions were asked and five were later added by the the compiler.

Question number forty ,is one of those five question added by the compiler. This question deals with Istamdad/Istighata.

In this book ( arbaeen masail) the answer is “ NOT PERMISSIBLE”

Where as same question was asked in Miat ul Masail ( question no 22) and the answer is “ Permissible”.

Question number 36 ( again added by the compiler) is dealing with permissibility of Urs ( annual gathering ) .

The answer given in this book is “ Not permissible”

Where as same question is mentioned in Miat Ul masail ( Question 22 ) and it has been declared “permissible”.

Also note , it is this question number forty ( dealing with istighatha) which was included by the compiler is OFTEN mentioned in the books like Fatwa Rashidiya .

See the scan from Fatwa Rashidiya

It does not have name , signature or stamp of Shah Ishaq.

It does not have any wittness.

This kind of manuscript is not a proof for ascribing a work to any scholar.