The Sheikh ul Islam and hadith Master of his age, Ibn Hajr Asqalani was asked about the practice of commemorating the birth of the Prophet, and gave the following written reply: As for the origin of the practice of commemorating the Prophet’s birth, it is an innovation that has not been conveyed to us from any of the pious early muslims of the first three centuries, despite which it has included both features that are praisweorthy and features that are not. If one takes care to include in such a commemoration only things that are praiseworthy and avoids those that are otherwise, it is a praise worthy innovation, while if ones does not, it is not. An authentic primary textual basis from which its legal validity is inferable has occured to me, namely the rigorously authenticated (sahih) hadith in the collections of Bukhari and Muslim that the Prophet came to Medina and found the Jews fasting on the tenth of Muharram `Ashura ‘ [Husn al-Maqsad fi Amal al-Mawlid Page No. 63] (Trsn Continued on Page 64)

so he asked them about it and they replied: “It is the day on which Allah drowned Pharaoh and rescued Moses, so we fast in it to thanks to Allah Most high,” which indicates the validity of giving thanks to Allah for the blessings He has bestowed on a particular day in providing a benefit, or averting an affliction, repeating one’s thanks on the anniversary of that day every year, giving thanks to Allah taking * any various forms of worship such as prostration, fasting, giving charity or reciting the Koran. Then what blessing is greather than the Birth of the Prophet, the Prophet of Mercy, on this day? in light of which, one should take care to commemorate it on the day itself in order to confrom to the above story of moses and the tenth of Muharram, [but] those who do not view the matter thus do not mind commemorating it on any day of the month, while some have expanded its time to any of day the year, whatever exception bay e taken at such a view. [Husn al-Maqsad fi Amal al-Mawlid Page No. 64]

I have derived the permissibility of Mawlid from another source of the Sunna [besides Ibn Hajar’s deduction from the hadith of `Ashura’], namely :The hadith found in Bayhaqi, narrated by Anas, that “The Prophet slaughtered a `aqiqa [sacrifice for newborns] for himself after he received the prophecy,” although it has been mentioned that his grandfather `Abd al-Muttalib did that on the seventh day after he was born, and the `aqiqa cannot be repeated. Thus the reason for the Prophet’s action is to give thanks to Allah for sending him as a mercy to the worlds, and to give honor to his Umma, in the same way that he used to pray on himself. It is recommended for us, therefore, that we also show thanks for his birth by meeting with our brothers, by feeding people, and other such good works and rejoicing.” This hadith confirms the aforementioned hadith of the Prophet’s emphasis of Monday as the day of his birthday and that of his prophethood. [Husn al-Maqsad fi Amal al-Mawlid Page No. 64-65]

Imam Shams-ud-din Dimishqi writes: It is proven that Abu Lahab’s punishment of fire is reduced on every Monday because he rejoiced on brith of Prophet (Peace Be Upon Him) and freed the slave-woman Thawba (ra) When Abu Lahab, whose eternal abode is hell fire and regarding whom whole surah of Tabad Yada (i.e. Surah Lahab) was revealed, he gets Takhfif in his Adhaab every Monday then Imagine the situation of a (momin) who has spent his life in rejoicing over birth of Prophet (saw) and died as a Mawhid [Husn al-Maqsad fi Amal al-Mawlid, Page No. 66]

The reality of Mawlid is that people gather to recite Quran to the extent that is easy, also to discuss narrations which are regarding Prophet (Peace Be Upon Him), the signs which took place on his birth. Then dinning is arranged for them and they return without adding anything more to this “Bidat al Hasanah”. The one who arranges it gets Thawab due to honoring Prophet (Peace Be Upon Him) and showing gratitude on his birth. [Husn al-Maqsad fi Amal al-Mawlid Page No. 41]

The birth of Prophet (Peace Be Upon Him) is a great blessing for us and his death is very saddening for us too, however Shariah has ordered us to rejoice and thank Allah on blessings, whereas on calamity it has taught us to have patience while hiding it, this is why Shariah has told us to do Aqiqa on birth which is a form of being happy and thankful to Allah for giving us birth, but on death there is no concept of sacrificing an animal and even lamenting is forbidden. Hence in light of rulings prescribed by shariah one should rejoice in Rabi ul Awwal on birth of our beloved Prophet (Peace Be Upon Him). [Husn al-Maqsad fi Amal al-Mawlid Page No. 54-55] 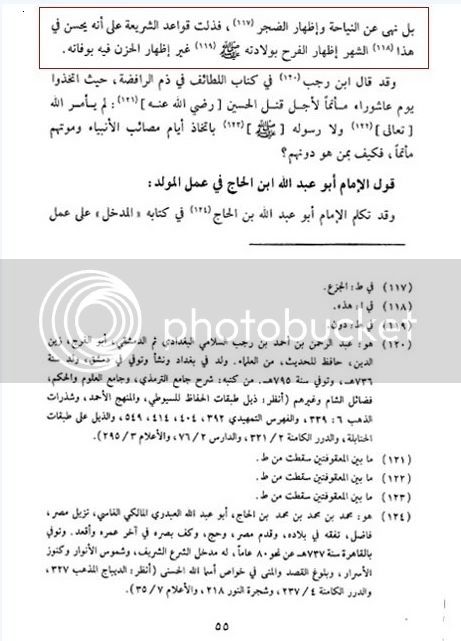