Imam Jalal al-Din Suyuti (rah) was asked for a Question “a group of Sufis who had gathered for a session of dhikr,” and he replied: How can one condemn making dhikr while standing, or standing while making dhikr, when Allah Most High says, “. . . those who invoke Allah standing, sitting, and upon their sides” (Qur’an 3:191). And ‘A’isha (Allah be well pleased with her) said, “The Prophet (Peace Be Upon Him) used to invoke Allah at all of his times” [Sahih Muslim, 1.282: 373]. And if dancing is added to this standing, it may not be condemned, as it is of the joy of spiritual vision and ecstasy, and the hadith exists [in many sources, such as [Musnad al-Imam Ahmad, 1.108, with a sound (hasan) chain of transmission] that Ja‘far ibn Abi Talib danced in front of the Prophet (Peace Be Upon Him) when the Prophet told him, “You resemble me in looks and in character,” dancing from the happiness he felt from being thus addressed.and the Prophet (Peace Be Upon Him) did not condemn him for doing so, this being a basis for the legal acceptability of the Sufis dancing from the joys of the ecstasies they experience, Hence it is correct to stand and dance during gatherings of Dhikr and Sama according to a group of Majority of Scholars, among them being Shaykh ul-Islam Iz udin bin Abd al-Salaam. [al-Hawi li al-fatawi, Volume 002, Page 234] 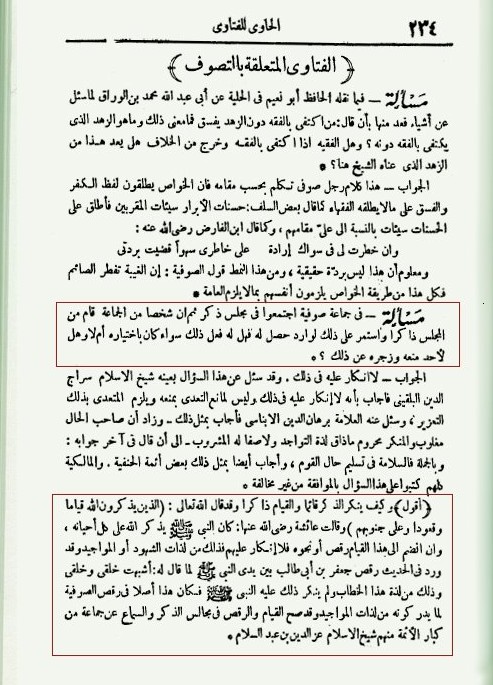