” First , the meaning of Khatamun nabeeyen should be well understood. For general population , the meaning of prophet ( sal allahu alaihi wa sallam) being khatamun nabeeyen is that the time of prophet is after other prohets and he is the last prophet. But people of understanding ( wisdom) have relaised that there is no superiority of being the first or last messenger in itself.

So for Deobandis there is no superiority of prophet in his being the last prophet.!

If you speak against any Deobandi scholar on deobandi forum , you will be banned. But if you praise those scholars who have insulted prophet( Deobandi/ Wahabis) you will be loved.

May Allah open our hearts to love all those who love and follow prophet. Ameen.

Page 7 ( read this translation , then do tawbah and recite Shahada)

Translation
“Prophets are higher and better than their followers( Ummati) only in knowledge. When it comes to good deeds, the ummati( followers) attain the equal status of prophets and some times they go above them “

I met a Deobandi in train and he tried to justy this statement. His clause was that since prophet started dhikr only at the age of 40 , if a boy starts at 5, he can go above prophet”.

“Even if we assume that during the time of prophet there is some other prophet some where else, this will not make any change in the status of prophet being khatmun nabeyeen”

Can any Deobandi allow me to assume something about his relative which is not correct? No , he won’t.
But regarding prophet they can assume and write any thing.

Translation
” If we assume that in future there comes any other prophet, this will not make any change in the finality of prophet ( khatmiyat muhammedi)”

Is the bell ringining now? Read this post and then go back to the previous post and see what they have written about their scholars. Plz read the post on ‘ Deobandi belief about khatamun nabuwwat”.

Please corelate and see the gate which they made for their scholars , but Ghulam Ahmed Qadyani enterd that gate before any deobandi scholar could enter!

See what Qadyanis say about ‘seal of prophethood” and compare it with above quotes of Qasim Nanotvee! 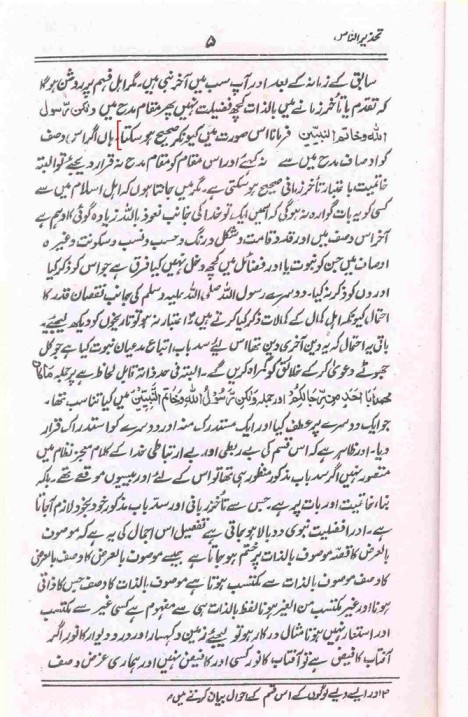