The belief of Wahabis regarding the Shrine of Holy Prophet ﷺ

“It is prohibited to construct a building on grave, so those graves which are raised and high are amongst the prohibited deeds in Shariah. To deny this act and to make them leveled to the surface of the earth is essential on Muslims, whether the grave is of a prophet or of anyone else”. (Arf ul Jaadi, page 60)

“The shrine of Prophet of Allah (pease and blessings of Allah be upon him) is capable to be collapsed down. If I become strong enough to collapse it, I will do so.” (Book: Auzh al-baraheen, page 10).

“To collapse down The Sacred Green Dome (Gumbad-e-Khazra) is a desirable act.”

The Book is “Ziyarat Masjid-e-Mustafa Sallallahu Alaihi Wasallam (Fazail-o-Ahkaam)” and the the writer is Shahid Muhammad Shafeeq Ghair Muqallid Wahabi.

Shahid Shafeeq said in the same book on page 133-146 that shrines of Auliya especially The Sacred Green Dome are act that are wrong and impermissible in Shari’ah.

He writes that it is forbidden to construct buildings, cupola and dome on graves. On page 146, this abject person crossed the limits of hatre and jealousness by, prepare yourselves mentally before reading this, saying:

“May Allah give strenght to the Saudi Arabian country that they make it (the Sacred Green Dome) according to the Sunnah, meaning to collapse the Green Dome down.”

By reading these statements, we can verify that the chests of followers of Najdi Shari’ah are filled with hatre and full of hostility.

It should be noticed that these days, an American presedential candidate babbled in his electing assembly that by taking all the authorities in the hold, we should target our attack on the sacred places of Muslims, i.e. Makkah Mukarrama and Madeena Munawwara. As an answer to his statement, the whole Islamic World did big protest. Strong replies were given on media and articles were written to comdemn this on newspapers. But here in Najd, to fulfill the dirty American plans, the Najdi Mullas started the paperwork (to fulfill the American agenda). People of Islam should be aware and should identify their enemy.

O Muslims! Still your will not open your eyes about these hypocritic policies of Wahabis? If now you will not be conscious about the Wahabis Najdis then when will it be? That Green Dome (Ghumbad-e-Khazra), to which if any Christian, any Hindu, any Jew says to collapse down, we will insensibility comdemn it but the same statements are written in the books by the unfortunate Wahabi, then where does our strength of faith go? 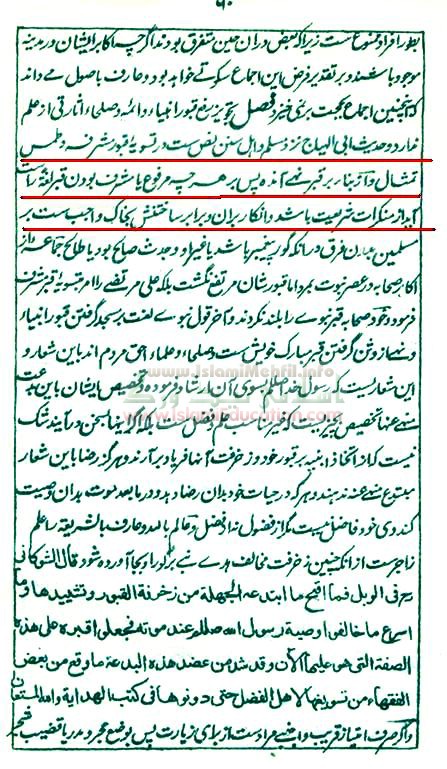